That video now has three copyrights:

In order for YouTube to place an ad on that video, all three copyright holders need to say it’s okay. For this to happen, the person or company that controls the song has to enter into a special contract with YouTube called a “Direct Licensing” contract. These contracts are typically given only to larger music companies, not to individual artists or songwriters. These contracts are not part of a YouTube channel deal–that is, the deal you agree to with YouTube to make money on your own videos.

To help the person or company find other peoples’ videos on YouTube that have their music in them, YouTube asks the person or company to deliver a copy of the recording of the song. YouTube then “fingerprints” the recording of the song and beams that fingerprint against the billions and billions of past, present and future videos on YouTube, looking for matches. 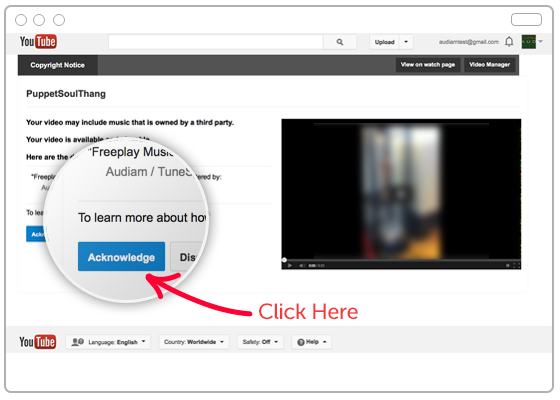 This same system more or less exists for the person that wrote the lyrics and melody as well.